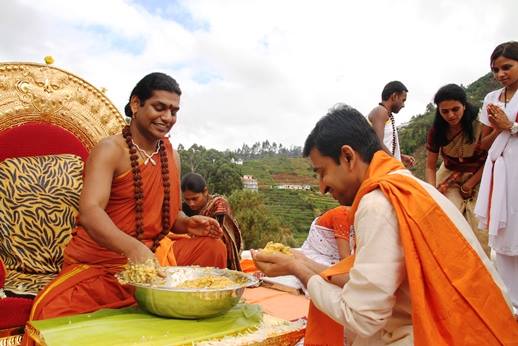 Company of the lower level people, because, they will somehow brainwash you to get into their space, and they will make you do what they want you to do.  Finally, they will put you in trouble; then they will escape; because they are very shrewd.  They will escape so that they will go and haunt the other person. One fellow, very popular preacher of suicide theology, he will preach, teach, literally mesmerize, hypnotize everyone to commit suicide, and lot of people have started committing suicide.  Teaching death is very easy.  That is why all death-based concepts spread like a wildfire.  All the death-based religions, concepts, killing yourself and killing others, they spread like a wildfire.  But the life-based religions, concepts, take lot of time.  The best life-based religion in Toto, hundred percent, is Jainism.  The pure, life-based religion, Ahimsa and life, saying “YES” to life!  But how much struggle that religion has to go through to spread!  Actually, there are no followers; literally there are no followers of Jainism.  That is the truth.  Except a handful of monks, a few people!  Because, it is life-based, doesn’t spread that wildly.  But all death-based concepts, they just spread like wildfire!

Dussangha!  Understand, biggest warning this Upanishad is giving is “Dussangha”, the “wrong company”.

Once, when I was in Ramakrishna Mission, I met a very senior sadhu, a great “thapasvi”.  His name is Nandananda, Swami Nandanandaji.  Great “thapasvi”!  Very rarely I have seen “thapasvi” of his calibre!  Actually, he has a little difficulty in hearing; not a little, lot of difficulty.  Literally he can’t hear!  But he is such a beautiful, innocent being, he is almost like a deaf grand-father of the whole family!  If there is a deaf grand-father in the family, how these grand-kids will tease him and play around him and go near him, shout, scream, and make fun.  He can’t hear, so he will be screaming and running around, chasing.  So, he was exactly the deaf grand-father of the family.  We small young brahmacharis will be running around him and teasing him, playing with him.  He was such an innocent being and such a loving being, caring being, he will enjoy the whole thing!  Just all by himself, walking from village to village, he established Ramakrishna Sangha in whole Andhra!  So much he has done just by walking from village to village!  He will take Ramakrishna’s photo on his head and go from village to village and established the Sangha.  In whole Andhra he has established the Ramakrishna Sangha!

When I met him, he was already well above ninety!  There is every possibility he can even be still alive!  Because, there was no sign of death in him!  And I have not heard the news he left the body.  There is a possibility he would have left the body and I have not received the news, or there is a possibility he has not left the body.  At least, when I met him, there was no sign of death in him.  And I am hundred percent sure he has achieved Bhaava Samadhi, means he can converse with, he can talk to Shri Ramakrishna directly!  Because I have seen him fulfilling the people’s prayers by talking to him, talking to Shri Ramakrishna!  Actually, when people ask him, the village people come to him and ask him any prayers, he will note that in Telugu.  He is from Andhra basically.  Born in Andhra, but I think, brought up in North.  Anyhow, he can write Telugu.  He will write, note that down in Telugu, and when he comes and sits in the room, when he gets into that Bhaava Darshana, bhaava, means when he starts doing japa and meditation, when he gets into bhaava, I used to help him, assist him.

Sadhu Seva is one of the greatest part of my lifestyle.  With all my work, I will never miss serving any elderly sadhu whom I come in contact.  From the time I know, I remember me, Sadhu Seva – serving the sadhus – was an important component of my life.  It is an instruction from Kuppammal.  ‘Hey, serve the sadhus.  You will be served thousand times better!’  And the word always came true!  The word always came true!  Now I can say I am the most served Guru on Planet Earth!  Not with any pride or arrogance, I can be very straightforward: Most served, most attended, most physically, literally, worshipped!  The whole thing is just because of the Sadhu Seva I did.  Understand?  Never miss serving elderly sadhus, especially when you know that they are honest sadhus, they are sincere sadhus.  They might be enlightened or unenlightened, they might be in the various levels of enlightenment, various levels of Samadhi, but if you know them that they are sincere sadhus, never miss serving them.  So, I used to serve him.

In the night time he will ask for a little hot water and all that.  And one problem with people who have a less hearing is, they will think we also can’t hear; so they will speak very loudly!  They will speak very loudly!  From his room if he calls, I can listen from my room which is almost hundred feet away!  ‘Khokhaaaa!’  He will call like that!  “Khokha” means “small boy”.  I am the youngest in my batch.  Actually, when I was accepted in the Mutt, I was a minor.  Minors are usually not accepted; legally you have to be a major, eighteen years.  But I did not completely my eighteen years, but they accepted me.  So I was called as “Khokha”.  And, he will scream!  When I run to his room, he will ask for a little hot water.  Very simple person; not much things needed; just a little hot water to drink in the night, and, very rarely he will ask for one banana.  And, very simple person!  So, when I give the hot water and wait for him to….I used to wait some time that if he wants to give some instruction or if he wants to ask something further.  So that time I have seen him getting into that Bhaava Samadhi and he will start talking to Ramakrishna!  He will start talking to Ramakrishna!  Please understand, he was not in any delusion or illusion, because, he will ask me, ‘Hey, bring that paper from that table!’  There was a small table nearby.  I will bring the paper and give it to him.  And whatever devotees have asked him, he would have penned down in that paper.  He will ask one by one.  And whenever he comes and stays in Mylapore Mutt, around that place there are a few slums, city slums.  There is Kapalinagar, Dhideerkuppam, and Ramakrishna Nagar.  From those slums people will come to see him.  He was well-known for fulfilling the prayers of people.  So, they will come to see him and he will tell Ramakrishna that, ‘This person wanted his daughter to get admission in the college.  Will it happen?  When it will happen?’  Just like talking to us, he will talk to him (Ramakrishna).  And then he will pick up a pen, and, ‘Oh, okay, it will happen aa?    Alright.’  No, he will tick.  And next day when those devotees come, he will explain to them, he will tell them.  I have seen this whole scene personally, end to end!  Means, when devotees come to him and talk to him how he notes down, and the night time how he sits and talks to Ramakrishna and notes down Ramakrisna’s answer.  And next day when the devotees come, he will call them and pick up that paper, and slowly read one by one with his loud voice.  He will explain, ‘Thakur bolchey…’ He will mix Bengali also into his Telugu, Tamil, all mix language.  He has his own language.  And he knows some four-five languages.  So, he will mix all that and… ‘Thakur bolchey’ means, ‘Ramakrishna said’.  And he will explain.  At least, whatever I have seen, not even one case failed!  Not even one reply he got back failed!  And it will be very precise!  Very precise!  Not collective or superficial, rough.  No!  Very precise!

I am a great Vedanthi.  I will not believe any of this easily.  For me, only my gurus are enlightened!  I will not bend, bow down in front of anything, anybody.  So, I tested two-three times.

And, I used to take him to the shop where his hearing-aids are made.  So I used to travel with him.  Closely also when I sit next to him also I will watch, ‘Has he really achieved Bhaava Samadhi?  Or, is he just having some illusion or delusion?’  But, continuously, I have seen him being in that space of joy and innocence.  Finally, one day, I was very clear, means, all my doubts are cleared that I am hundred percent sure he is in Bhaava Samadhi, and he really talks to Shri Ramakrishna, and he really gets the response!  That much I realized, I understood.

Nandanandaji was even in Madurai Ramakrishna Mutt.  He spent a lot of time in Madurai Ramakrishna Mutt also.  And, he will go and talk to Sundareshwara also!  He will go to temple and stand in the garbhamandir, and talk to Sundareshwara (Mahadeva).  One day I was really convinced about his greatness and he is established, he is established in Bhaava Samadhi.

Usually he will speak loudly.  Suddenly, he just pulled my hand, and pulled me near him, and started telling me very lightly, means, I think he is trying to convey something very secret (in a whisper), ‘Hey, ask Bhagawan always to have good company and never you should get into bad company.  That’s all you need to ask.  Never you should be attracted to bad people and bad company!  You should always be with good people and good company.  Have only good people’s satsangha.  Never you should be influenced, attracted by bad people.  That’s all I ask him for me.  I will ask the same for you also.’

That’s it!  I tell you, still I remember the power of those words!  It may look very superficial and simple for you guys.  Only if you know the context, the situation, a man who can talk to God directly every night as he wants, says, ‘I think I should ask only this: “Let me not have bad people’s company who influence me wrongly”.’  I tell you, bad people’s company is such, they can even steal, rob, Guru in your life, who happened after janmas of “thapas”, understand!  After hundreds and hundreds of births, your prayers, your “thapas”, your fasting, your meditating, a living Guru happens in your life!  The bad company – Asurya naama they lokaa andhena thamasaavruthaah (असुर्या नाम ते लोका अन्धेन तमसाऽऽवृताः) – these people, asuras, the company of the asuras, bad people, can take away, rob even the greatest happening, that Guru, from your life!  Be aware!  Be careful!  Be aware!  Be careful!

Nandanandaji, that Swamiji said, ‘Whether when I am living, or after death, don’t allow bad people’s company to happen to you.  That’s all I wanted.’

Dussangha is the worst curse, I tell you!  Because, even you falling into depression or slipping from spiritual lifestyle, spiritual practice, is not crime; it may be mistake; but you can, if you have good company, you can recover and come back.  But, company of the bad people is blunder!  Blunder!  Blunder!  Understand?  They will be so enchanting, enticing, I tell you, always the bad people will be enticing, because they are encouraging all your basic instincts, they are encouraging all your agitative excitements; they don’t let the maturity happen.  So, the company of bad people is the blunder! 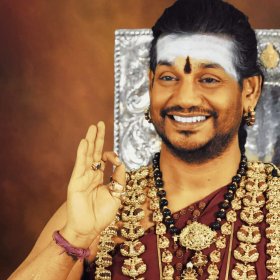 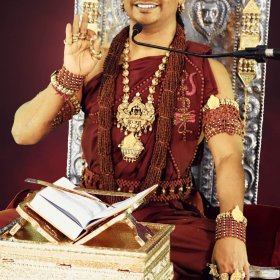 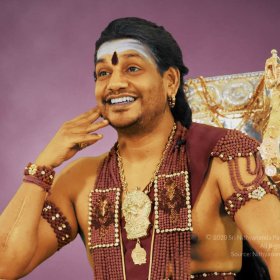 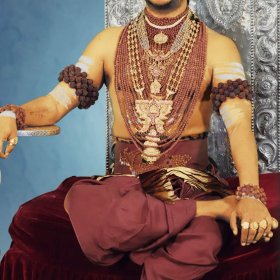